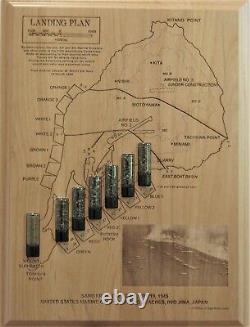 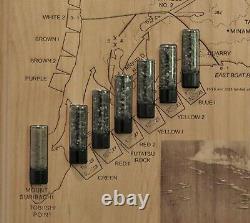 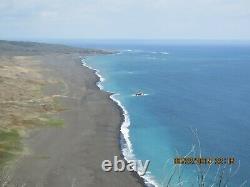 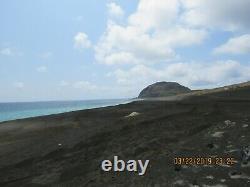 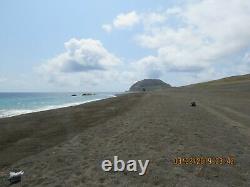 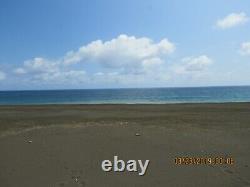 Where was the sand collected from for the Iwo Jima Landing Plan plaque? This sand was collected from the February 19, 1945 United States Marine Corps Landing Beaches, Iwo Jima, Japan - Green, Red 1, Red 2, Yellow 1, Yellow 2, Blue 1 & from the top of Mount Suribachi. You have a new plaque?

Yes, finally we have a new plaque. The Iwo Landing Plan Plaque has been requested almost since the day we started in January 2015.

The initial thought process started in June 2016 but did not really get off the ground until the following year. The Iwo Jima assault by the United States Marines was studied and researched extensively over the next two years. The plaque was created, designed, tested and prepared for production. The only thing holding up the plaque was the sand, and that problem was solved on March 23, 2019. Why does the sand in your first two plaques look so much different from each landing beach? Beaches come in many colors: white, black, tan, yellow, red, and more. The geology of the surrounding area determines the color of those rocks. This determines what material is available for a beach. The colors are from the different rocks and minerals that make up the sand. The color of the sand on any particular beach usually reflects the surrounding landscape and the makeup of the adjoining ocean floor. Will you have a limited number of your Iwo Jima Plaques available? Iwo Jima is not the easiest place in the world to get to. Ito Jima (as it is now known) in all respects does not exist except as a Japanese Military Base. Do you have any licenses to sell your plaques? I have heard that you can find bits of shrapnel in the sand.

It does appear that you can find iron/steel in the Normandy sand. We initially were able to locate the shrapnel in the sand from Omaha Beach so far, though research indicates it is possible to find it in all the invasion beaches. Some research indicates that up to 4% of the makeup of the sand is shrapnel. When you get your plaque, place a strong magnet over the vial of Omaha Beach sand and you might be able to attract very, very small particles to the magnet.

The sand from Iwo Jima is "exploding" with shrapnel. Without pursuing any research, the 4% figure from Omaha will pale compared to Iwo Jima.

Will the wood of my plaque look different than the one that you show? Wood is a natural product, and no two plaques will look the same. Some will be darker, some will be lighter, and some will have a different wood grain. The plaques we are using are red alder wood.

How can I display my plaque? The plaque has a keyhole cut out on the back to hang it on the wall. This seems to be the preferred way to display the plaques. Can I remove the vials from the plaque? Yes, the vials can be removed with a little bit of effort.

They are held in by the friction of the cap against the wood. You can carefully "wiggle" them out and push them back in.

Remember, if you take the vials out, you should take out one at a time and replace it before looking at another. They are not marked as to which beach they belong to. You might have a plan to mark them yourselves, so you can replace them in their correct slot. We have found that a small adhesive label (1/4" x ¾" or smaller) attached to the back of the vial will allow you to write the name of the beach and return it to its correct position on the plaque. A label this size cannot be seen from the front when displayed. My plaque's vials are upside down and the photographs show them to be the other way around. Did you assemble them in Australia? No, they are assembled here in South Carolina. Initially the design was as seen in the photographs. About three years ago, whether by act or accident, the vials were placed in a plaque upside down. The reaction from our focus groups and customers was amazingly positive. The placement of the vials now make it appear even more like a monument with a base under the sand. The plaques will all be made like this from now on. If you were an early customer and want to order the other plaque with the vials to match up, let us know and we will make a special order for you. Sometime soon our website photos will be updated. When can I expect to get my plaque? They are being processed on a first come, first served basis. We hope to speed that up shortly as we catch up with the orders. What is a certificate of authenticity? A certificate of authenticity (COA) is commonly a seal on paper authenticating a specific art work which and is made to demonstrate that the item is authentic.

COAs are mostly common in the art world. A valid COA for an artwork will include specific details about the artwork like when and how it was produced, the names of people involved in the artwork's production, the work's exact title, and the names of reference. Your COA will be printed, signed and notarized as to the collection, location, and provenance of the sand from the invasion beaches of Normandy and/or the European Theater of Operation, as well as the sand from the Iwo Jima Landing Beaches. It can't be my eyes, but I keep seeing the " " character when you mention sand from the Iwo Jima Landing Plan plaque. This black "sand" is not the typical sand people associate when they think of beach sand.

The black "sand" from Iwo Jima is unique to volcanic islands. The "sand" forms when hot lava contacts the much cooler sea water causing a violent, explosive interaction. This interaction causes the lava, in this case basalt, to shatter into millions and millions of fragments, and produces this volcanic ash. The basaltic glass grains feel very sharp and unlike any beach sand that most people experience. I read somewhere that you donate a portion of your proceeds to a couple of 501(c)(3) foundations. Have you received any feedback on your plaque? Thank you for your dedication to preserving WWII history! I have been collecting ever since a B-24 belly gunner gave me a silk flight map of Italy that he flew with on his 53 combat missions from his base in Italy. I was nine years old. My father is a former Marine and my wife's grandfather fought with the 28th at Iwo - so this is a present to her for Christmas and to preserve HIS story! He never spoke to his daughter (my mother-in-law) about Iwo, and just some to her brother. Thank you for the plaques that I did receive yesterday. I really like the piece and thought it would look nice with your other two plaques. Thank you for the discount and appreciate your prompt turn-around time. Please let me know if I can be of any more help. I have been to your site many times, but I originally found it in WWII Magazine that I subscribe too. Thanks for supplying these memorial plaques. It is a retirement gift for my husband. He loves the other two. I'm sure he will appreciate this one as well.

I have other collectibles with Iwo Jima sand, but this one is by far the BEST! It's a great design with the island and having the sand from each landing beach and Mount Suribachi.

The item comes very well packaged and you'll get it FAST. You can't go wrong. This item is in the category "Collectibles\Militaria\WW II (1939-45)\Original Period Items\Other WWII Original Items".

The seller is "zorkle" and is located in this country: US. This item can be shipped to United States, Canada, Mexico, Norway, Bangladesh, Bermuda, Guernsey, Gibraltar, Iceland, Jersey, Liechtenstein, Sri Lanka, Monaco, Maldives, Pakistan.